Vaping, or smoking electronic cigarettes is a popular alternative to traditional smoking, and it’s often considered less harmful because the liquid doesn’t contain carbon monoxide and other substances that may be dangerous for people’s health. But, that doesn’t mean that vaping is a healthy option, and only adult people, over 18 years, should decide whether they will consume them, or not. Since the cartridges contain tobacco nicotine, glycol, propylene, and artificial flavors, you don’t need to be a scientist to recognize that they aren’t really naive and appropriate for everyone. They also bring some potential danger and may harm your health, so in this article, we won’t recommend anything to anyone, but we will try to explain and see what people prefer most for vaping.

The vaping pen or cigarette is warming up the e-Liquid in the cartridge, turning it to aerosol or steam, so the people can inhale it. Many people believe it’s harmless, since you don’t need to use a lighter and fire, and there is no harmful smoke that gets inside your lungs. But, the e-juice is not a harmless thing, because as we said, it contains a lot of chemicals, so it can be stable enough not to burn because of the warmth, and to be inhaled without causing any harm to the mouth, tongue, or throat. Why people find vaping more interesting than traditional smoking? The answer is simple – it’s a little less harmful, and at the same time, it offers a wide range of different flavors and aromas, as you can see on VaporSolo. This is one of the reasons why people are curious to try electronic cigarettes, so they can find their favorite one. But, what are the most popular flavors right now?

For those who prefer nice tobacco blends, and want to feel the very same taste as the usual cigarette, tobacco-flavored e-Liquids are the best choices. You can even find your favorite brand, and get the same taste, so you don’t feel like smoking something different than the traditional cigars.

Some people prefer the menthol flavor even when they smoke the usual cigarettes. They want the chill and refreshing feeling it gives, and that’s why they are still choosing this type of e-juice for their vapor.

Liquid cartridges are good because you can fill them up with any flavor that is available on the market, including tiramisu, bubble gum, brownies, cake, vanilla ice cream, cinnamon rolls, and so on.

For those who prefer a fruity taste when they vape, there is a wide range of products that taste like that. For example, you can find many fruity flavors, including tropical fruits, like pineapple, papaya, or mango, then strawberry, blackberry, all types of berries, apple and cinnamon, cherries, banana, and so on.

No matter if you prefer cola or coffee, or even some of the popular cocktails, you can have them in your vapor every time of the year, and enjoy the pleasant flavor they offer.

Not every spice has a pleasant taste when not put in food. But, cinnamon, cloves, vanilla, nutmeg, saffron, they all have a nice aroma, that fits great in the e-liquids.

Some of these juices may contain even CBD oils, for different purposes. But, some of them have just the same aroma as the popular cannabis plant, which is considered a drug in most of the countries in the world. People nowadays are getting aware of its benefits, or they like the taste, but don’t want to take the active parts, so they are choosing this type of juice to enjoy.

What else do I need to know about vaping?

As we said, it’s considered a less harmful alternative to traditional cigarettes, but you must keep in mind that it doesn’t mean it’s completely safe. It’s still under researches how many chemicals one cartridge contains, but you can be sure there are less than in regular tobacco cigars. Since they first came to the market, vaping sets are controversial, and people have different opinions. Some of them find the e-cigarettes even more dangerous than the traditional options, and the other part really enjoys the aerosol-based way of smoking, and the different flavors they can choose.

But, according to many studies and researches, even electronic cigarettes are addictive, and they can be related to lung diseases, cardiovascular diseases, or even lead to a heart attack if you are smoking too much. Even though they are referred to as a way to quit smoking, you can easily get addicted to them, because the liquids contain nicotine. You can even choose a nicotine-free option, but then, what’s the purpose of inhaling steam that contains a lot of chemicals, if you don’t enjoy the nicotine?

Also, we need to be aware that many kids start smoking when they are younger than 18, so if you have an underage child, you need to explain to them what are the bad sides of nicotine, and that they should save the money you give them for food. According to some studies, teenagers in the USA were choosing e-cigarettes, because they don’t smell bad, and their parents can’t realize they are smoking. That’s why every parent needs to be concerned about this topic and try to explain it the best they can to their children.

Vaping isn’t a way to quit smoking completely or to make yourself believe you are doing it in a healthier way. It’s just another way to enjoy nicotine products, and you should always be aware of the potential harmfulness of your choice when it comes to things like this. But, if you are an adult person who is able to make decisions, while aware of the risks of their actions, then you can control how much you smoke, and when is the right time to quit, no matter if you are choosing the traditional cigarettes, electronic ones, and recently popular tobacco-heating based devices. 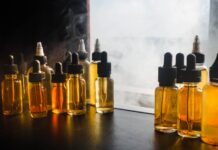 How to Store E-Liquid for a Long Time