Home Technology news Types of Robotic Joints and Robots in 2022

A robot can be regarded as a machine that resembles human beings. It can duplicate certain human functions electronically with the help of a computer. This means that its motion is computer programmable which makes it controllable.

Each robot consists of separate robotic joints, which you can read more about at rozum.com. These joints make the robot to act similarly to human beings due to their relative movements. The connection of these joints helps the robot to move materials, tools, and devices during their performance of a variety of tasks.

Some robots have such a high safety rating that they are allowed to work hand-in-hand (or better to say gripper-in-hand) with humans. They are called collaborative robots or cobots.  Here you can check joint details and characteristics for robots.

These are five main types of robotic joints:

1. Linear joints- linear joint can be designated by its letter L- meaning it can perform both translational and sliding motions. For this joint to achieve its linear motion the links should be arranged in parallel axes. They are also known as prismatic because their cross-section is referred to as the generalized prism.

2. The Orthogonal joint-This joint in some way resembles the linear joint. The only difference is that its input and output links move at right angles as they are perpendicular to each other.

3. Rotational joint- rotational joint can be regarded or represented as R-joint. As its name suggests, the rotational joint will allow the joints to rotate along the axis. The rotary motion can be vertical to the arms axes or perpendicular to the input and output links axes.

With these joints, the robotic arm can perform multiple industrial tasks like welding, handling of different materials, painting and many other applications.

Now let’s have a look at some Classifications of robots

Cartesian robots have links connected by linear joints and they have certain advantages:

Despite the advantages they also have some disadvantages:

Cylindricalconfiguration robots have one rotary (R) joint at the base and linear (L) joints that help to connect the links.

The Polar configuration robot has a working space which is spherical. The polar robot arm is connected to its base with a twisting (T) joint and rotary (R) and linear (L) joints follow.

When the cylindrical and articulated configurations are combined they form the jointed-arm configuration robot. The robot’s arm is attached to the base with a twisting (T) joint. The links that are in the arm are connected by rotary (R) joints. This is the most common configuration of many commercially available robots.

Classification based on the control system

The continuous path robot is capable of performing movements in a controlled path, where the robot can stop at any point along the controlled path. All the points along the path a well-programmed in the robot’s control memory.

These robots the controlling mechanism can bring about different paths e.g. straight lines, circles, and curves with high degree accuracy. In these robots, it’s only the start and stops points and the path that is stored in their memory.

Now when you know more about different types of joints and robots, it’s time to choose one for your business. 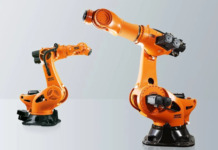 How Are Industrial Robots Built? – 2022 Guide

Can You Use Machine Learning Algorithms For Sports Betting