Certain features highlight the similarities between robots and humans. Although robots and humans appear opposite at a glance, they still share the same framework of links and joints. Just like the human skeleton, industrial robots are built from the combination of links and joints that act as the android arm. Similar to the elbow, shoulder, and other joints in the human body, such joints in industrial robots can also bend and move about. Likewise, the links in the androids can be likened to the bones of the human body. Transmission of power through these links is a common feature in both humans and androids. For the authentic information about robots, you can visit rozum.

The primary basis used to categorize robots is how their links are arranged, and they are divided into two types;

This categorization is similar to that of humans. Joints are either in series or aligned, and the bones are the links. Robots can also be categorized based on the type of movement in the joints and the structure. This classification includes horizontal articulated type, also known as selective compliance assembly robot arm-SCARA and vertical articulated type. Learn more about how a robot joint works here.

We will take an insightful look at the motion and internal makeup of industrial robots in the latter part of this article.

Comparison Between Motion In Human And Motion In Robots

Let’s start by taking a look at the vertical articulated movement type that has a similar mechanical structure like the arm of a human. The vertical articulated android generally has six joints with a serial link structure. The similarity comes from the fact that the entire existing six axes have similar movement with the human arm. This six-axis construction in robots allows it to move about as humans do. For instance, the first three axes imitate the position and carriage of the wrist in humans, while the next three axes allow it to move freely like humans.

What Do Joints Need To Move?

Here, we will take an in-depth look at the way the internal structure of an industrial android is constructed.

An industrial android is basically made up of four parts which are;

Before going ahead to explain these parts one after the next, it is essential to know that cables and harnesses can be built inside the android to enable the android to work in a small space. The speedy operation of the robots can be directly linked with its agile movement and internal structures. For instance, the R series android is active in a wide range of fields because of the way it is built.

Actuator: the actuator inside the android performs two significant functions. The first one is that it converts the available energy into mechanical motions that power the movement of the androids. Likewise, it also acts as the joints in androids. These joints allow the vertical, horizontal, and rotatory motion of the android. If you find it hard to understand this concept, just think about motors as a case study. Only a highly functional engine that has control over speed and position are used in industrial androids. An example is the servo motor.

Although hydraulic and pneumatic energy is sometimes used, the regularly used energy source to power actuators is electricity. However, hydraulic-powered actuators have the advantage of being resistant to shock, and can also generate the needed power

Encoder: Encoder is a device that shows the angle or position of the rotational shaft in the motor. The encoder determines the angle and speed of the motor’s rotation by reading the signal sent when light is either blocked or allowed to pass through the slits. The slits are located on the disks. They are arranged at a precise interval to allow the passage of light. This disk is often attached to the rotating shaft of the motor in optical encoders. The light intensity is discriminated against by the light-emitting-diode [LED]. The light-receiving elements, also known as photodiodes that are attached to both sides of the disk.

In general, having an encoder can help you to gather essential data about the direction and the extent of the robot’s movement.

Reduction Gear: The reduction gear usually increases the power of a motor. The primary reason why motors are generally used in combination with reduction gear is to generate significant power. That is because employing an engine alone is limited to the amount of energy it can produce. The combination of gear wheels with different numbers of gears and reduction of motor’s factor rotation by ten can consequently lead to the power of the engine multiplied by 10. You can consider bicycle transmission for you to understand this principle better.

Transmission: The transmission is one of the most critical components in the android. It helps in the communication of power generated by the actuators to the reduction gears. This transmission can have a significant effect on the magnitude and direction of energy. The concept of a bicycle can also help you understand the principle better. Bicycles are moved when the rotational movement of the pedals is taken and transferred to the rear wheel using the transmission. The transmission here is the chain that connects the crank to the back wheel.

It can be seen in the wrists of R series androids that a compact wrist is possible because the conduction mechanism makes it possible for the motor to be installed in the elbow part of the arm. When the engine used in an android is placed away from the joints, transmission mechanisms like belts and gears can then be employed.

Just as humans can carry out various tasks with different tools, industrial androids can be made versatile as well. This versatility can be achieved by swapping the device attached to their wrist. This swapping allows them to carry out different tasks based on what is attached. This swappable device is known as an ‘end effector,’ and there is quite a number of this end effector that is readily available for use. This end effector includes tools for welding and painting, various vacuum types, and hands for lifting objects. The combination of the flexible movement permitted by the shafts and the attached end receptors specific for each task allows the android to perform a wide range of functions.

This article will help you to have a better understanding of how androids are made and how they function. The end effectors show that industrial androids can be put into use in different ways by companies that need them. If you want to learn how industrial robots are changing manufacturing check out Techslang. 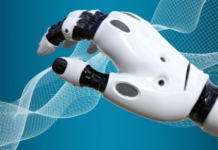 Types of Robotic Joints and Robots in 2023