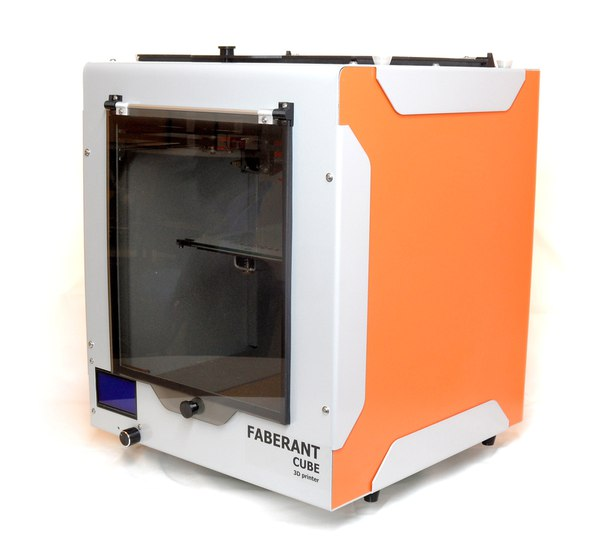 Some of you may have already heard about the Faberant Cube 3D printer with double precision, but most of you don’t know what this machine is capable of. And now we, as its creators, are going to tell you about this 3D printer.

Faberant Cube is a Russian printer that has been produced since 2018. The printer has an enclosed build chamber that makes it possible to print durable heat-resistant details of polycarbonate and nylon. It is also possible to use polypropylene, polyurethane, ABS, PLA, FLEX, Rubber, HIPS, PVA, SBS, PETG. The bed’s heating temperature is up to 170 °C and the temperature of all-metal extruder is up to 340 °C.

The body of the printer is made of 2 mm-thick steel. The XYZ motors and the electronics are located outside of the print chamber in the separate cooled compartment. The build volume is 200×200×245 mm and the original motion system with double precision FCoreXY is used. The printer is developed for commercial exploitation, although it is successfully used in educational facilities and for private purposes.

Faberant Cube 3D printers are constantly improving. The developer always pays attention to the users’ requests for different improvements, follows the recent developments in the 3D printing sphere and constantly upgrades the quality of technical specifications and usability of the printers. For instance, in the given price range, this printer is one of the few machines whose bed can heat up to 170 °C. Also, its all-metal extruder (or hot end) heats up to 340 °C and makes it possible to print with the use of all types of plastic, including high-temperature nylon and polycarbonate.

So, why is it necessary to heat up the bed so much? The thing is, that the higher the melting point is, the hotter the bed and the air in the chamber should become. Otherwise, the product unsticks from the bed because of shrinkage, and the printing process stops. For example, when printing with polycarbonate extruder temperature can reach 310 °C, and if the small details can be printed at the temperature of 130 °C, then medium details are printed from 150 °C, and the large details – at 170 °C.

There is an original thermal barrier that is used in the extruder. Removing it from the radiator is not necessary during the nozzle replacement. It is enough to release one screw, and the whole heating unit can be easily pulled out for the quick replacement. Also, as a matter of convenience, apart from automatic change of plastic there is manual feeding with the help of the sidestick. It facilitates the maintenance of the printer.

Initially, the printer was developed as an enclosed one and that is why it doesn’t have any wires and tubes sticking out. Also, there is no space that makes the size of the chamber bigger, unlike in printers from other manufacturers.

The printer can be closed with removable doors from above and from the front. When using a great number of printers, it’s possible to place them on top of each other in order to create “printing walls”.

As for the kinematics, the Faberant Cube uses its own original design – the motion system with double precision – FCoreXY.

The classical CoreXY exceeds the H-Bot kinematics that is used in the majority of similar printers. It happens due to the fact that the poor stability of the axes during the movements is compensated. Because of this poor stability, such printers can work only if they feature expensive linear guides.

The CoreXY printers can perfectly print using more affordable cylinder guides. By the way, this printer uses high-quality guides from Sweden made by SKF.

The difficulty of classical CoreXY realization is that it has a special construction: two belts should intersect. Different solutions are used in order not to let them touch each other.

The new system of FCoreXY uses a solution with two levels, where the belts are located parallel to each other and don’t intersect. Some sheaves in this construction are situated two levels above each other on the same axis and take up less space than in the classical CoreXY.

The main difference of FCoreXY is that the developers turned the motors’ axes into the horizontal plane which made it possible to improve the layout of the rest elements. Meanwhile, the CoreXY motors are brought out of the print chamber and hidden in the accessory compartment with forced ventilation. It’s necessary to say that almost all other printers have these motors in the print chamber and they can overheat. That will not happen with the Faberant Cube 3D printer.

Also, the system of FCoreXY uses extra units that are located very close to each other, which means that they don’t take up a lot of space in the construction. The displacement equations show that the FCoreXY precision can be 4 times higher than of the classical systems.

For example: when the belts are moved by two motors for 10 cm each, 20 cm totally, we can spot the extruder motion of only 5 cm, thus 4 times less, which means more accurate.
If the regular printers work with the precision of 0.1 mm on the XY axes, then the printer featuring FCoreXY can print with the precision that is 4 times higher – 0.025 mm on the XY axes.
As a result of using the system based on FCoreXY, the Faberant Cube 3D printer can work with high geometric precision: as the layers are applied with the high precision along the XY axes, the side surfaces of the part come out visually straight and the product itself is very high-quality.

The Z-axis was also upgraded: a special Z-axis reducer with the correlation of 1:25 was developed for the Faberant Cube to create layers as equal as possible in terms of height and very high-level quality of printing. It means that the precision of printing will be 2.5 times higher than that of the printers without such features.

If you’re thinking of integrating 3D technologies into your business or want to buy a more interesting machine for your hobby, check out this link:
top3dshop.com/product/phrozen-shuffle-xl-3d-printer.

This professional 3D printer has an industrial-grade build quality, which is rare for such a relatively low price.

If you’re interested in 3D printing, but don’t know where to start, check out this buyer’s guide. It’ll help figure out what machine you need. What Do You Do if Your Car Accident Injuries Appear Days Later?

Is the Hyundai Tucson a Good Car in 2022